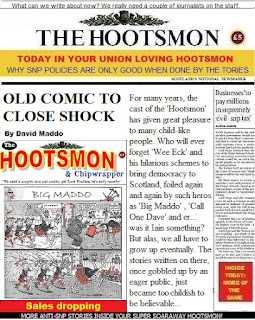 I remember being sent 'for the rations' to the local grocer with my elder sister, as we were the youngest of a huge tribe of older siblings, all of who were in higher education or had their own part time jobs.
Between us we carried an ancient shopping bag by having a handle each, so our puny wee muscles could carry quite a lot.
We handed the handwritten note over to the Elder Grocer if we could (he would 'gie us a sweetie' where as his '& Son' wouldn't). Amazing as it would seem today, the list always included a gill of whisky and a can of McEwans Pale Ale, given to a six and a nine year old without  a murmur...

Now what happened next, depended on the amount of change and if we had gotten sweeties or not.
Off to John Menzies, just opposite, we'd either get a comic and a sweetie, or two comics; I'd get the Victor or the Hotspur, my sister would get the Bunty, the Beano or the Dandy or both if the finances were right.