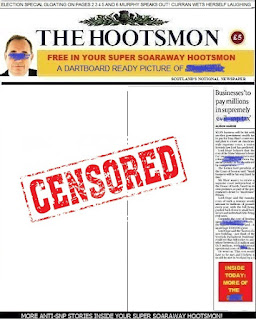 Back in the olden days, when the term "Cybernat" was a twinkle in Laird Geordie's researchers' eye, I got caught up in a flamer on (you've guessed it) the Scotsman's comment pages. My original moniker disappeared from the annals of history for good, and I stopped posting for a while.

After Foulkes' and the advent of "Nat Black Ops" the moderators got desperate and started banning people for banter, or for revealing themselves as previously banned, or just on a whim, who knew?
Now the good people at Newsnet Scotland seem to be going down the same road; their reason is that the MSM pick up on the more rabid statements and publish them and them alone as evidence that the SNP are "swivel eyed loons".

Yet once you start censorship, mission creep begins. A post calling the Scottish Secretary a cunt is fair game to the blue pencil, then any satirical reference to him and finally there is the removal of any post that is slightly disrespectful to the Queen's annointed on this earth...

If Newsnet Scotland thinks that this approach will stop unionists calling them Newsnutter or Newsnat then they are mistaken. Instead of an organic discussion leavened with humour and off topic revelations, they will end up with a very sterile site indeed.
Posted by Conan the Librarian™ at 10:11:00