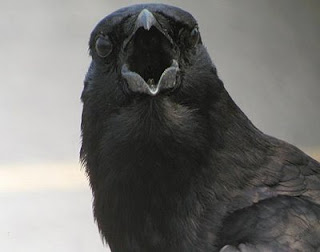 I was walking the dogs this morning, and I saw a lone dog in the distance and put them all on the leash(I have a wee psycho who will attack anything).
So instead of me ploughing serenely along like an elderly battleship surrounded by four ferreting frigates, I came across a scene which normally would have been over before I got there, as the aforesaid wee psycho would have dealt with it.
I noticed the crow first.
Perched on a fence, black eyes on its prey and very reluctant to give way.
The object of attention was on a wee tailess starling, no doubt a survivor from a cat attack.It was sitting on the ground exhausted or resigned to its fate.
What should I do I wondered?To try and help it(a bit difficult with four excited terriers),leave it to it's fate as a leisurely breakast, or kill it quickly myself?
I've seen living mixomytosis rabbits with their eyes pecked out by crows; I chose the last option.