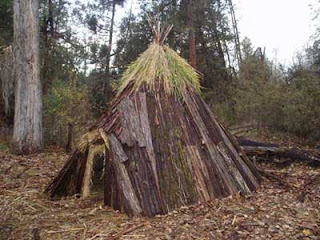 Grok and Urak stood back and admired their handywork, an igloo shaped medley of branches, mud, pelts and mammoth dung.
Grok, wiping his hands on a passing child, said;-
"A Good Job, Urak, twenty beads at least."
"Hmm, maybe last winter, but now..."
Replied Urak hesitantly.
"Robus and Aitchbos lent all their beads to-"
Screwing one eye shut, he then grabbed an imaginary chicken by the neck and shook it up and down at chest level, simultaneously jabbing a thumb at the chiefs shelter.
"Wah!" Screamed the small child. "I've got to milk the mammoth!"
Grok patted the ululating child on the head, adding to the debris nestling in it's hair.
"On you go Brownlie, we're having a grown up talk about beads."
Turning back to Urak.
"What on earth for?"
"So he can lend them back again?" Shrugging his shoulders.
"There goes the shelter making way of getting beads, then."
Said Grok, scuffing the mud with his toe.
"-nkers." He mumbled.
"That's a good name for them." Said Urak.
"What will we do now?"
"I'm hungry, Mandy said he fancied us around for a spit roast."
The two men looked at each other.
"Naw." They said.
Posted by Conan the Librarian™ at 00:40:00