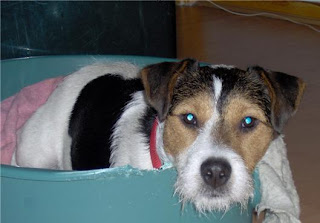 Subrosa kindly asked how I am on her blog; thankyou, I'm off for another four weeks.
The Doc said I'm to get out and exercise as much as possible, much to the delight of my dogs.
I'm spending much more time with them, and that's a good job for all of us.
I've had dogs all of my life, but the first twenty seven years of it I didn't like "Wee yappy dugs"; I grew up with a Golden Labrador called Paddy.
I had my shotgun licence at seventeen, and spent many a happy hour in the company of gundogs.
Then along came a Jack Russell puppy ambitiously named "Thunder"...I buried him under a tree in my garden eighteen years later...

That was it. No more dogs ever. It hurts too much.

Then, one summer we were having a barbie. A tiny explosion of hair, pink tongue and frenzied tail wagging, got under the fence heading straight for the smell of charred meat and beer.

Me, in other words.

Some time later, I reluctantly handed her back to a sullen teenaged girl with a face that would soor milk.
Puppies are such fun until you have to look after them...

My wife and daughter made enquiries.We got the puppy.

How I got three others is another story...