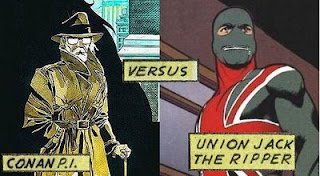 Conan pulled out the cattle prod he had liberated from Niko's room, oh so long ago...

A mask was unzipped. "Yew were wot nicked it, when yew dun over my gaff yew cant."

It all clicked in Conan's head.

"Don't be a fool!" Spat Niko, pulling of his mask and with a hint of regret, tossing it onto the pony-tailed shambles behind him.

"Haven't worn one of those since Oxford...no, they were getting a bloody liability old boy."

"Stupid MI5 wankers! They were doing more harm than good, practically recruiting for the damned SNP!"

"Subrosa? Deep undercover for the Dundee W.I. She got away...Very jammy that one."

Conan hazarded a guess "Spook is Mossad?" A nod. "Then Brownlie is...?"

Niko frowned " A total kno-" "No! Who he works for!"Shouted Conan.

"Why Conan, he works for The News of the World..."

Conan gasped in horror "...Well at least it's not the Scotsman."