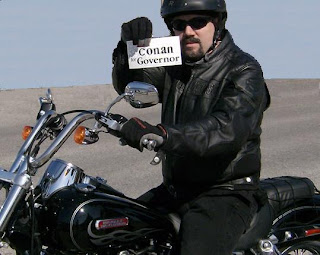 I've been thinking about mortality quite a lot lately; I've been ill and people I know my age have been dying like flies, just like when I was a teenager...
When I was a ba' hair off forty(a few years ago now!), I grew my hair long again and got my leg over a motorbike after a hiatus of a dozen years.
At an illegal speed on the road tae Lithgae, doing my best Wallace and Grommit impersonation(no scarf) a sense of deja vu hit me.
It was the seventies again and me and the mates were meeting up at a pub we'd heard about before going on a run.
I got there second last(My bike was crap, it sounded like someone rattling a spoon in a tin of catfood), so we sat and waited in the warm summer sun, taking the piss out of each other.
And waited...
Twenty years later I sat outside the same pub, the bike's engine ticking as it cooled.The warm weather was the same, as was the smell of hot oil and rubber, the bike and the beer much better.
Yet I was alone, there was no teenage banter...and I could not remember his face.
I was at that pub lunchtime today.
It's a gastropub now, and all the customers were middle-aged middle-class couples, some with their grandchildren.
I joked with my wife "Three times in thirty-odd years; I'm a regular."
We got home and I received a phone call saying an old friend had died.
I've been thinking about mortality quite a lot lately.
http://www.youtube.com/watch?v=RdfPER5Cgm8
Posted by Conan the Librarian™ at 02:44:00