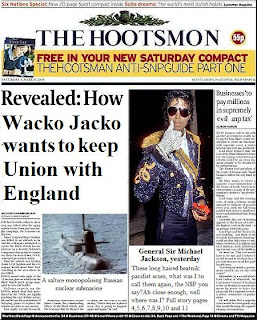 Ah...em...I don't know what happened here, I had a block of text which seems to have vanished...Nothing at all to do with Nigerian imported Guinness with an ABV of 7.5%

Anyway, the aforesaid block of text was about me thinking that a deid pop star and a British General, that had the same name was extremely funny; plus that New Labour were moaning about that the SNP had somehow monopolised the St Andrew's flag.
I was trying to point out that the Russian Navy also had dibs.
Ah well.
Posted by Conan the Librarian™ at 11:33:00