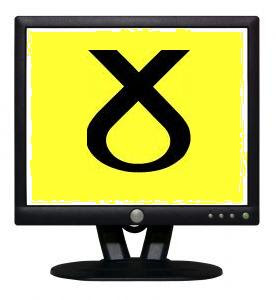 It was back in August 2006 that I first got broadband. It was a wee suprise for me from the beloved as I was in London when the hub was installed. Having only dial-up before then I had not tended to use the internet at home.
At work, I had been following the political scene(on my breaks, honest!) on the Scotsman website; it was then an excellently designed piece of work, very user friendly.The editorial content, however I thought a wee bit biased to the utterances of the (here comes the capitals) Unionist Parties.
I followed with fascination the comments on the political blogs; I laughed with Ayrshire Scot and Methelions and got exasperated with AM2.
I wriggled in my seat and thought "Right Go For It!"and signed up.

What would be my moniker?I didn't want to use my real name because I have some "Issues" with my employer; I remembered Joe from Waterstones being suspended from his job for calling them "Bastardstones"...That was mild to what I wanted to say.
Yes, I work for the council.
So the nickname from my biker days it was.
My heart pumping faster I launched my first comment.
Into the void.
But eventually I got what every poster(and blogger) wants-recognition.
There became a regular bunch of us, we used to pick on poor AM2 most of the time, and to his credit he stuck to his guns and gave as good as he got without resorting to invective.
I gave in once and gave a mouthful to a long forgotten abusive moniker; I got barred.
I was distraught, I had stopped going to the pub to do this for fucks sake!
But help was at hand from my chumrades(copyright Monty), AS and Meths developed" Advanced Punctuation For Good",
so I became Conan the Librarian ™.
Then that weel kent socialist Laird, a skier on the slopes of Glenfiddich, an admirer of the demi-monde of Carlton Hill and all thing troughery, the Bloody Nosed Baron Full o' Cum nock, the puncher of little old women, came up with the tag: CyberNats.

I liked it, it showed our wee bee stings were starting to hurt.

And I was proud to call myself a CyberNat.

I still am. I don't care if the rants of some borderline deranged people are now supposed be CyberNattery, I was there when the term was coined.

Labels: CyberNats, posting on the Scotsman, when it was a good website