Art is either plagiarism or revolution. 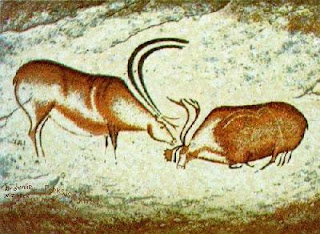 Grok put the last finishing touches to the reindeer's hoof, stood back and viewed his painting with a critical eye.

Urak, who had been intent on painting outlines of his hand got up and stood beside him.
"Wow." He said admiringly. "It's like it's in the cave with us."

"Hmm..." He said, stroking his beard.He looked around carefully."Is it a bit...stuckist?" He whispered.
Grok flinched at the name.Also looking around, he licked his lips and replied. "I don't think so..."
"Remember when they picketed Tate's cave?" Spoke Grok, more confidence in his voice.

"Dressed in that horrible warpaint..." He shuddered. "White faces and reindeer's noses...still gives me nightmares...fucking clowns."

Urak nodded. "I mean what's wrong with a hut you can paddle down a river in? Seems bloody useful to me."
"Or a handy bed in the cave, if you fancy forty winks?"
Grok shrugged."Poor Damien, he was so proud of that big fish."

"And the sheep!" Exclaimed Urak.

"Oh, remember the mammoth? He had to split it down the middle to get it through the door!" He exclaimed."And then he said it was on purpose!"

Wiping tears of laughter from his eyes, Grok said "Are you hungry? I think Damien's doing a barbie with the other bits."