FREE BEER from it's bottles. 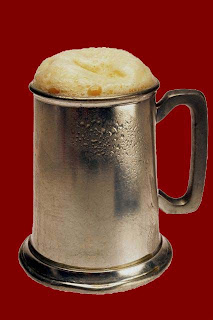 
It's now thought that beer, and not bread, gave impetus to the first civilisations.


It's only with the rise of coffee houses, where business could be conducted in sobriety, that one part of society started looking down it's nose at the drinking habits of the other.And that part, of course, is the one with the wine cellars at home.


The nursery rhyme "Pop goes the weasel" is about excessive gin drinking in the mid eighteenth century.
Drunk for a penny, dead drunk for tuppence, clean straw for nothing.


Hogarth's Gin Lane is a condemnation of it; his lesser known Beer St shows prosperous tradesmen all contentedly quaffing large tankards of ale; a pawnbroker in his ramshackle premises is handed a half pint.


In the mid to late ninteenth century it was religion and the Teetotallers.


The licensing laws were introduced during the First World War to stop munitions workers coming back drunk at lunchtime, or coming to work in the morning with a hangover.


The factory owners, of course, had their clubs which did not need a licence.

Imagine it in Germany? Time mein Herren bitte...oi you with the Chaplin moustache!Stop organising armed rebellion, drink up and get out.


There were complaints recently about the large supermarket chains selling beer cheaper than water.

I thought that reflected more on the idiots who bought the water myself...


So the next time you cross the road to avoid a schemie/chav/pikey/ned with his bottle of cider or Buckie, know that you are just the latest in a long line of people who have felt superior to him and his ilk, all through the ages.

And be thankful that your straw is cleaner than his.
Posted by Conan the Librarian™ at 08:34:00