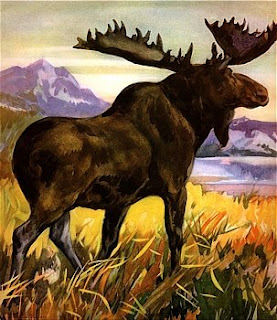 Grok and Urak stood on the shore of the loch, staring a the bizarre sight floating there.
On a raft in the middle of the loch was a contraption that resembled a huge bow on its side, lashed to a ramshackle construction of logs. The projectile loaded on the bric-a-brac bricole was twice as long as a man; it ended in three sharpened prongs, like a fish spear.
"What's it for?" asked Urak, confident that his friend would impart total enlightenment.
"It's to stop the Flatlanders".
Urak nodded, satisfied.
"Bastard Flatlanders. What were they trying to do anyway?"
Grok scratched his beard. "Er...it wasn't what they were going to do...um it was to stop them from doing it if they ever wanted to."
Urak scratched his beard also. "Eh?"
"They had these Elks...have you seen them? Huge fucking antlers. Dangerous bastards."
"Aye..."Urak was scratching his head now "But..."
Grok was getting irritated."Aye right we've got the mammoths, yes okay!"
He took a deep breath. "We needed an edge, something that would neutralise their elks..."
"Ah" said Urak, looking out at the loch.
"So it's a Weapon of Moose Destruction..."