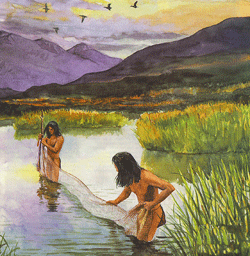 Grok and Urak were walking out of the settlement one morning, going fishing.

Grok was carrying a fishing spear, a pole, a net and some hooks, Urak had the rest of the gear.
"How much further?"
he grumbled, starting to sweat under the weight of the large pot of freshly brewed beer.
They passed Brownlie, proudly lugging a full bucket homewards, and hurriedly refused his offer of a drink.
"Why didn't you tell him it was the cow mammoths he was to milk?" Said Urak.
"Where's the fun in that?" Grinned Grok evilly.
They reached the fence, and as usual Tavish was firmly astride it.When asked if he wanted to come he hummed and hawed for so long they left him to it.
They were not long out of the settlement when they became aware they were being followed.
Fooks and Steerpike*Murphy were lurking in some bushes.
"Can we come?" Whined Fooks his eyes greedily gazing at the beer.
"You can come, if you carry the gear."Said Urak sternly, piling it on.
"But you; you are fucking useless at outwitting Salmon, sling yer hook!"
Steerpike slunk off, humiliated again...

"Fancy a piece of Sturgeon?" 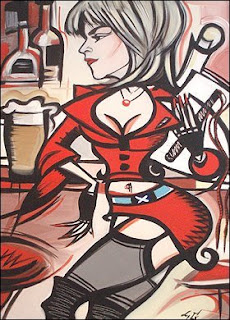