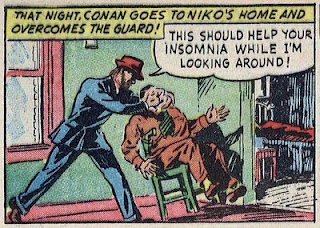 Investigating a ruthless gang involved in vote-rigging, fraud, gun running and politics, Conan P.I. finds himself at the local Labour party HQ.
Using a carelessly discarded pair of Union Jack boxer shorts, Conan rocked the guard to sleep, gently humming the Internationale...
Rifling through Niko's bedroom
Conan finds various leather garments.
A leather hood with a zip for the mouth is found.
Conan presumes Niko uses it in his heists.
A heavy plastic truncheon catches his eye.He finds a switch near its base, and flicks it on-then jumps in sudden fright as it buzzes and leaps out of his hand!
" A cattle prod of some sort" he thinks."It may come in handy, interrogating prisoners..."
Conan pushes the cattle prod down the front of his trousers.
Then-paydirt! 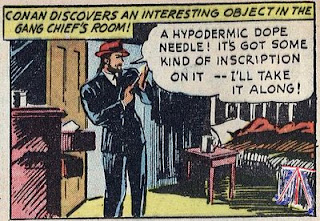 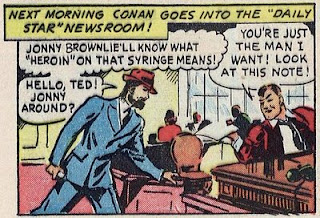 Darn! Who else could he ask what the mysterious syringe was? 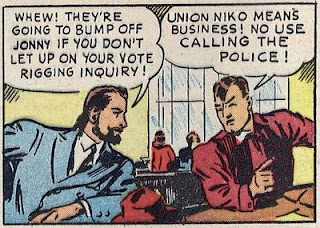 Ted promised to look into the matter, made an excuse and ran to the mensroom, wrapping something around his arm.

A Dick! Conan was furious! He thought his blue suit, brown shoes and pink fedora was cutting edge! 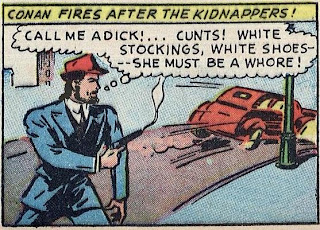 His secretary looked up from Conan's trousers.
"Is that a gu-" "No time for chitchat, Miss Clara!" Said Conan. 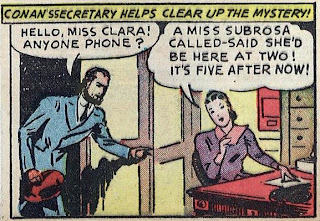